Québec by the Sea

A whale of a good time on a mother-daughter getaway to the Gaspésie region. 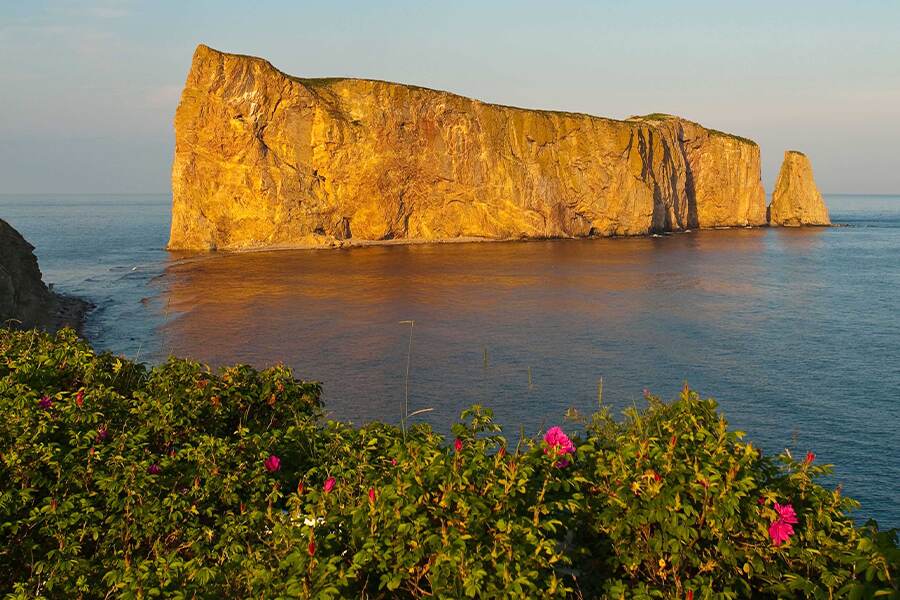 I didn’t expect to see the end of the world…in Québec. Yet there it was: A tree-covered precipice jutting out into the vast sea. Dubbed Gespeg (“Land’s End”) by the Indigenous Mi’kmaq people, it’s just one small, albeit spectacular, corner of Forillon National Park, situated on the eastern tip of the Gaspé Peninsula.

The rugged, windswept Gaspésie region spans more than 30,000 square kilometres and is home to four national parks, 13 species of whales and hundreds of thousands of seabirds. Seeking fresh air, food and wildlife spotting, I’d come to Québec’s coastal region on a mother-daughter getaway with my mom, Debbie.

After checking into Hotel Baker, a cozy bolthole with scenic bay views, we make a beeline to the local museum for a primer in Gaspésie culture. “There is just so much history in this area,” says Katherine Yockell, education coordinator at the Musée de la Gaspésie. “Of course, we have Jacques Cartier—who landed here in 1534—but there’s also our Indigenous roots and the cod trade.”

Yockell is the first of several young Gaspésiens we meet who are bringing a fresh perspective to Québec’s maritime region. She guides us through 400 years of local history, pointing out highlights of the museum’s revamped permanent collection, which debuted in June 2021.

We learn about Cartier’s explorations, the boom and bust of the cod fishery, and the daily lives of Gaspésiens through the centuries. Among the museum’s quirkier pieces is a clown costume, once worn by native son and politician René Lévesque, and a Second World War torpedo fired in the Battle of the St. Lawrence. The museum also hosts eclectic touring exhibits. During our visit, we view contemporary digital art.

History and brews in Percé.

Talk to the Town

On Rue de la Reine, a charming street lined with shops and cafés, Mom and I grab lattes to go from Paquebot. The Scandi-chic café serves artisanal java and fresh-baked pastries as well as Québec-made wine. After perusing local boutiques, we head the imposing stone cross dominating the waterfront.

Known as the Birthplace of Canada, it’s thought to be the spot where Jacques Cartier first claimed “New France” on behalf of the French king. Upon pulling ashore nearly 500 years ago, Cartier erected a wooden cross (which has since been replaced by the 42-ton stone structure).

With our thirst for Gaspésie history suitably quenched, it’s time to satisfy other cravings. Brise-Bise, a bustling bistro popular with locals, is the perfect spot to sample regional specialties. But first… drinks! I settle on a pint of pilsner by local microbrewery Cap Gaspé, while my mom opts for a pineapple sangria. It’s one of four types on offer at the pub, which doubles as a live music venue.

On a sunny day, the eatery’s wraparound terrace offers impressive views of the port of Gaspé. The week before our trip, local fishermen hauled in a massive bluefin tuna—which bistro chefs quickly snapped up for their plat du jour.

Since we missed out on the fish feast, I go for a plate of classic Québécois poutine, piled high with squeaky cheese, while Mom tucks into a bowl of slow-cooked French onion soup. Another must-eat is mussels marinières, served with thick-cut frites.

A mother-daughter selfie of the author and her mom, Debbie.

The next day—after a hearty breakfast of ham crêpes at hotel restaurant Tétû—we hit the road on Route 132. The winding highway hugs the coast of the Gaspé Peninsula and serves as the main thoroughfare in the region. Our first stop is the Micmac Interpretation Site Gespeg, about 10 minutes from town.

“The Mi’kmaq were a semi-nomadic people who moved between the coast and interior forests of the peninsula,” says Taylor Clark, an energetic 20-something Mi’kmaq and centre guide. In the reconstructed circa-1675 Mi’kmaq village, Clark demonstrates daily life, from hunting and smoking fish to carving and building shelter. Walking through birch-bark wigwams, she points out the incredibly efficient building techniques that allowed the community to thrive during harsh Québec winters. Although they likely never numbered more than a few hundred in this area, the Mi’kmaq people continue to live in the region today.

From the centre, we head east to Cap-des-Rosiers Lighthouse, Canada’s tallest lighthouse. Built in 1854, the National Historic Site stands 34 metres and was originally built to guide commercial cod fishermen.

To see more of the rugged coastline, we drive a bit farther to neighbouring Forillon National Park. Established in 1970, Québec’s first national park spans 24,400 hectares of epic cliffs, beaches and waterfalls. The real gem in the park’s crown is Cap Bon Ami, a cape of looming cliffs at the edge of the Gulf of St. Lawrence. The main lookout offers a front-row seat to spot seals, spouting whales, thousands of seabirds and the aforementioned Land’s End.

Mom and I amble down several flights of wooden stairs to the beach below. A small waterfall rushes down the cliff as we pick up pebble souvenirs. Though we don’t hike to Land’s End, many visitors make the four-km trek along the Mont Saint-Alban Trail to the easternmost tip of the Gaspé Peninsula. 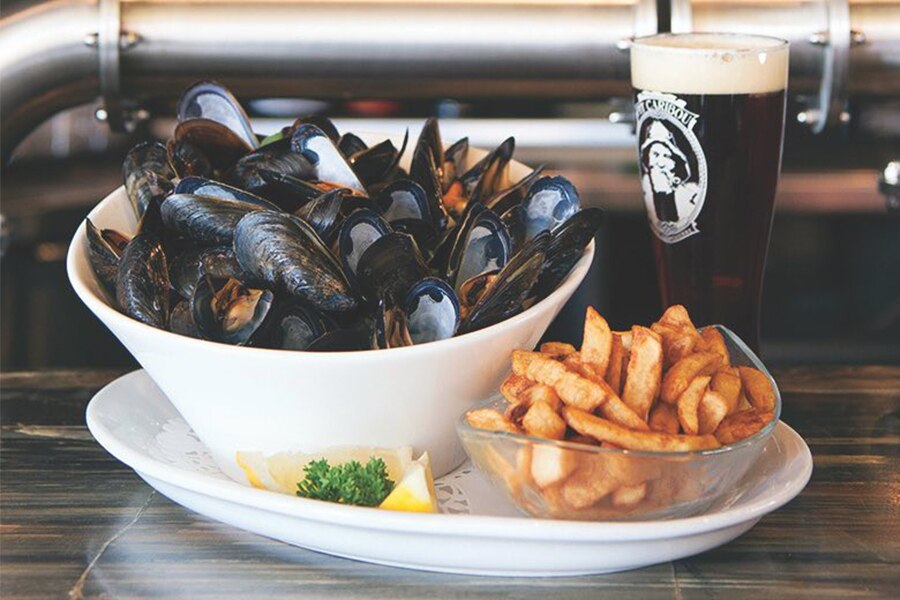 With sharp turns and steep uphill climbs next to jagged cliffs, the trip from Gaspé to Percé is a white-knuckle drive. In the passenger’s seat, my mom takes comfort in pressing the imaginary brake pedal on her side of our rental car. The challenging drive is well worth it as we approach Percé, a tourist town with a permanent population of 3,300.

On our approach, a giant pink arch dominates the view. At first glance, Percé Rock looks like a massive ship, permanently docked offshore. Measuring 443 m wide and 88 m high, it’s one of the largest natural arches in the world—and draws thousands of annual visitors to this former fishing village.

Percé is the quintessential beach town with family-run inns, cottages and motels hugging the Gulf of St. Lawrence coastline. After checking into the Riotel, a cozy waterside retreat, Mom and I stroll along the boardwalk and stop for lunch at La Morutière. The nautical-themed restaurant serves seafood specialties like lobster rolls and local fish soup.

We make a pit stop at Pit Caribou, a pub and microbrewery housed in an old general store. The popular watering hole, which also hosts musicians and artists, serves some of Québec’s tastiest ales and lagers. A pint of Blonde de l’Anse is the perfect end to a Gaspésie day.

The View from Here

Percé Rock seems to have an invisible pull, making it impossible to take your eyes off it. Even the sun seems drawn to the enigmatic stone, illuminating it like a celestial spotlight.

“The rock fascinates me, and I still can’t wrap my head around its amazing formation,” says Max Deck-Léger, science and education manager at Percé UNESCO Global Geopark. The centre showcases 500 million years of the region’s geological history. Deck-Léger explains that Percé Rock travelled from the equator during a tectonic shift some 400 million years ago.

For a different view of the rock, we catch a shuttle van up Mont Sainte-Anne to the park’s suspended platform. Hovering over massive pine trees, the 200-metre-high glass-floored lookout provides incredible views and an adrenaline rush. After much coaxing, my mom inches out over the glass to join me on the platform (though she maintains a tight grip on the handrail).

Back on terra firma, we make our way to the wharf for a boat tour around Bonaventure Island National Park. While waiting to board, we spot the slick black back of a surfacing orca. On the boat, we watch harbour seals sun themselves on any open square inch of rock around the island. There’s also an air show: Bonaventure is home to North America’s largest colony of northern gannets. Above us, some 200,000 soaring seabirds paint the sky white.

But you don’t need a watercraft to see wildlife in Percé. Mom and I kick back on the patio of our water-view room, chatting about our Gaspésie adventure. Sipping a couple of local libations, we’re surprised and thrilled to see a fin whale surface just a few metres from the nearby beach.

Sitting in the afternoon sun, we watch for hours as this whale, the second largest animal on earth, dips along the waterline. It seems this place isn’t the end of the world—it’s the start of remarkable experiences.

The best spots in North America to see wildflowers in full bloom. 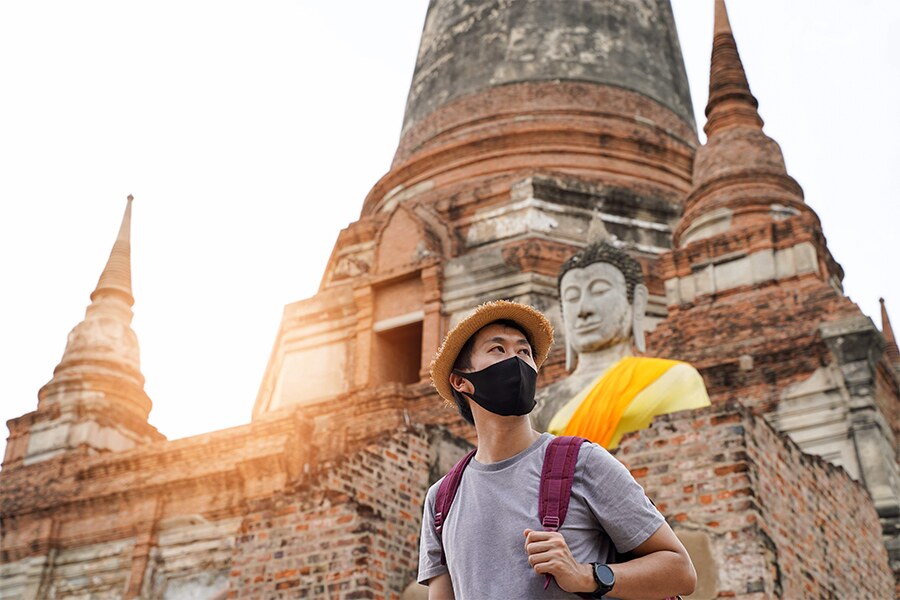