The Coast is Clear.

Legend says the Saint John River formed when the God-like Glooscap approached a frog monster that was hogging all the water. Glooscap cut down a tree, which fell on and killed the greedy amphibian, allowing the water to run and create the Maliseet First Nation.

Cultural interpreter Cecelia Brooks tells me the origin story as we walk through Fredericton's Odell Park, near the river. Today, Glooscap's water wends its way from Maine to the massive Bay of Fundy, home of the highest tides in the world.

I'm following the river's route to explore New Brunswick's natural delights—and to learn about a few human ones, including Salvador Dali, a railway baron, a saucy stone carver and my very own great-grandfather.

My road trip begins on a sunny afternoon with Brooks, her son and grandson, plus a pinch of tobacco. "To offer back to the forest," Brooks says. "It's a prayer." I carefully set the tobacco under a branch. During our walk in the woods, we spot medicinal plants, which kept locals healthy for millennia, and hear about the days when hundreds of Maliseet birchbark canoes plied local waterways.

One such canoe, the Grandfather Akwiten, took a rather large detour on its way to the Beaverbrook Art Gallery in downtown Fredericton. In 1825, a wealthy British officer shipped the cargo canoe to his castle in Ireland. When the Irish famine hit, he lost his fortune trying to keep people fed. After he died, the canoe ended up at the National University of Ireland in Galway—where it sat, all but forgotten, for more than 150 years. In 2003, a professor at the university sent the canoe to Canada for restoration and repatriation.

The vessel, the oldest birchbark canoe in existence, will eventually move across the river to the Maliseet First Nation of St Mary's. For now, the six-metre boat is the first thing you see upon entering the gallery. "It's a sacred item," says guide Gerry Rhymes, "whose longevity resulted from the unintentional neglect of the university and Ireland's dampness."

As we walk through Beaverbrook's impressive collection, Rhymes spills plenty of entertaining details about the renowned artists and their works. "I could go on for days," he says, and I believe he would, if given the chance.

At Salvador Dali's giant masterpiece, Santiago El Grande, Rhymes tells me to lie on the floor to get the proper perspective of Saint James riding a white stallion. I grin as the guide points out an atomic explosion and other deliciously bizarre symbolism.

I grin again the next day while driving across the ocean floor at low tide. My GPS shows me traversing the blue water between Saint Andrews by the Sea and Ministers Island, where rail tycoon William Van Horne once summered.

In the 1880s, the industrious Van Horne oversaw construction of the railway and iconic hotels such as the Banff Springs—along with an island mansion, impressive farming operation and swimming pool on the beach (it filled and emptied with the tide).

Still chuckling about my "walk on water," I go whale watching when the tide comes in. Aboard the Jolly Breeze, a high-speed zodiac, I spot Cork, a humpback that also likes to summer here. Harbour porpoises frolic around the boat as the whale waves her fluke.

On the ride back to Saint Andrews, we stop at the Old Sow, the world's second largest whirlpool, formed by the rising tides.

Next up: the ferry for Grand Manan Island. Approaching the harbour, we glide past Swallowtail Lighthouse, erected in 1860 following a shipwreck off the northern tip of the island.

After docking, I head to the idyllic Inn at Whale Cove Cottages. Proprietor Laura Buckley's mom—a fifth generation islander—ran the place for decades. Over the years, she named rooms for regulars, like Eloise Derby, who stayed every summer for 50 years. "She wintered in Paris and came here until she was 96," Buckley says. As you feast in the dining room, note the decades-old photos of various guests lining the walls.

I dive into my own family history in Saint John. Though it's my first visit to the former shipbuilding hub, my grandfather, Sandy Ross, grew up here. Walking next to rows of Victorian buildings, I wonder about his life here, before he left for World War II and later settled in the Prairies.

I suspect Grampa, a bit of a card, got a kick out of the odd stone faces peering down from Chubb's Corner. Carved in 1878, they appear to mock civic leaders of the day. A newspaper editorial slammed the stone carver for his "buffoonery" and I bet my great-grandfather, the Reverend Ross, would have concurred. He appears rather stern on the signage marking a little park in East Saint John that's partly named for him.

Ancestral pilgrimage and obligatory selfies complete, I head east for some kayaking in St. Martins. "We have a truly beautiful playground here in New Brunswick," shouts my guide, Thomas-René Dupont, from the back of the kayak as we paddle out to explore sea caves.

After about an hour, we haul up at the base of a massive red cliff to enjoy smoked salmon and other local goodies. Following lunch, rising waves start to crash into the rocky shore. "That's high tide," he says. "The waves will lessen in a few minutes." They do and we hop back in the kayak.

Above us, tour buses from cruise ships docked in Saint John are driving the new 30-kilometre Fundy Trail Parkway. Though the road will eventually snake all the way along the coastline to Fundy National Park, for now it's an out-and-back drive to enjoy UNESCO-designated sites and dozens of trails, waterfalls and flowerpot rocks carved by the tides. The most famous flowerpots are a couple hours east at Hopewell Rocks.

At low tide, the flowerpots look like giant heads with trees for hats and dark seaweed collars. Legends claim they're Mi'kmaq who were turned to stone by angry whales. I can't help but wonder whether they talk to each other when we're not around.

Standing atop a lookout, I marvel at the invisible line keeping 160 billion tons of water back from the mud fields now glistening in the sun.

Of course, there's more tidal action in Moncton. Twice a day, every day, water from the Bay of Fundy rushes up the Petitcodiac River causing a giant wave (tide times are posted daily). In Bore Park, a pretty downtown pathway running along the river, people come early to chat and wait. But we all stand silent as the wave rushes toward us.

"Well, you don't see that back home," I say to a fellow tidal watcher from Quebec. As I walk away along the river, a jogger stops and asks me, more than a little astonished: "What was that?" Turns out, he's visiting from Grande Prairie, Alta. As I explain the wonder of the tides, we smile at each other—just a couple of western Canadians bowled over by New Brunswick.

A guide to building, living in or renting a home away from home.

What you need to know before hitting the road to celebrate Manitoba 150 this summer. 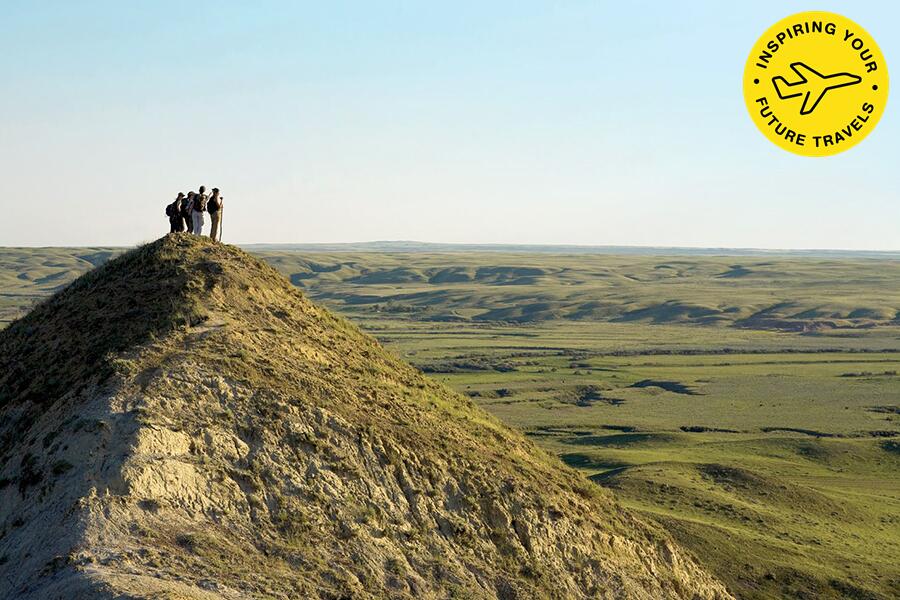 Over the Next Hill.