Over The Next Hill.

Explore Saskatchewan's native grasslands with the nature conservancy of Canada.

As we leave the seemingly endless expanse of cultivated croplands west of Regina, the landscape transforms into a sea of grass blanketing gently rolling hills. But this isn't your garden variety lawn grass; it's a rich mix of native prairie species that have thrived here for millennia.

Grass isn't the only thing to thrive in these parts.

At Old Man on His Back Prairie and Heritage Conservation Area (OMB), about an hour east of the Alberta-Saskatchewan border, wildlife flourishes. A pair of mule deer bound across the road in front of us; pronghorn rest in a hollow; and a horned lark lands on a fence post.

Driving over the next ridge, we spot the park's most prized specimen: Primeval-looking bison grazing on a tract of green that stretches to the horizon. Looking beyond the road and fence line, it's easy to imagine this pristine landscape long before settlers ventured to Western Canada.

As a flagship project of the Nature Conservancy of Canada (NCC), Old Man on His Back protects one of the world's most endangered natural landscapes.

"People often think of tropical rainforests and coral reefs as the planet's most critical habitats in need of conservation," says Dan Kraus, NCC senior conservation biologist. "But grasslands are the world's most endangered ecosystem. In Saskatchewan, nearly 80 percent have been converted."

This rare piece of native prairie was once the ranch of Peter and Sharon Butala. It was also the inspiration behind Sharon's bestselling book series, which celebrates the Prairies and ranch life. When they retired, the couple was determined to protect their beloved land. The Interpretive Centre, located in the Butala's old ranch yard, tells the story of the property and the importance of mixed-grass prairie.

At one time, millions of wild buffalo roamed the Great Plains. Wandering through the hills, you can still see tipi rings and medicine wheels left by ancestors of the Nekaneet Cree. Centuries ago, this First Nation followed the great herds, relying on North America's largest land mammal for food, clothing and shelter.

Canada's great western expansion, coupled with the spread of the railway in the 19th century, facilitated buffalo slaughter on an epic scale, nearly driving the species to extinction.

For the past decade, the NCC has worked to bring back the bison, a direct descendant of the North American buffalo. What started with a few genetically pure animals (free from cattle DNA) has grown to a herd of 100.

Visitors can wander the pastures of the 5,297-hectare ranch on foot, being careful to avoid approaching bison. For a guided experience, join OMB interpreter Alan Dumontel when he's available. Although bison are the big draw, you could spot other rare species, such as the swift fox, ferruginous hawk and burrowing owl.

When darkness falls, OMB is truly spectacular. Free of light pollution in the sparsely populated setting, the area was designated a Nocturnal Preserve by the Royal Astronomical Society of Canada, making it the first such NCC property in Canada. To enjoy the dark sky—or the magical light of a sunrise or sunset—visitors can camp near the Interpretive Centre. But keep in mind: It's not a purpose-built campground, so facilities are limited.

The conservancy encourages industrious visitors to sleep over during the annual summer Campout for Conservation. Volunteers help with projects, such as building nesting platforms for ferruginous hawks, installing bird-safe caps on metal fence posts, or constructing bat boxes to assist the endangered little brown bat population. After sundown, Royal Astronomical Society members haul out their impressive telescopes for the ultimate stargazing experience. 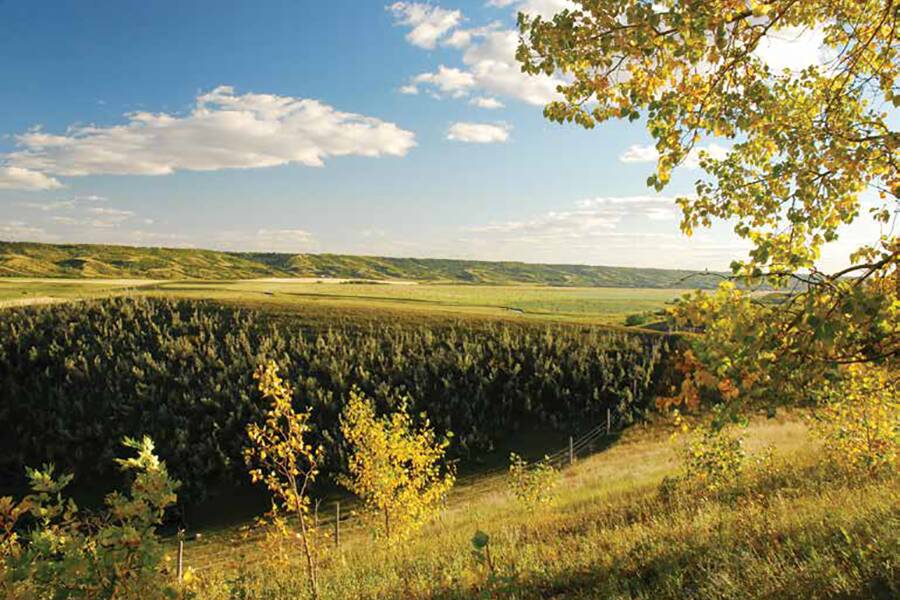 Fairy Hill in the Qu’Appelle Valley

While the leading threat to grasslands is conversion to croplands, some regions face unique challenges. To see one such area, we drive straight north of Regina. After about 40 kilometres, Highway 6 begins its sudden descent into the magnificent Qu'Appelle Valley. Near the rim, we turn toward Fairy Hill Nature Trail. It's the centrepiece NCC property, encompassing 665 hectares of valleys and wetlands.

The Qu'Appelle Valley ranks among Saskatchewan's most beautiful landscapes—a mosaic of hills, woodlands and open grasslands dotted with wildflowers. It's also a fertile flood plain prized for agriculture. But crop conversion is just one pressure here. A significant threat stems from the scenery itself: Cottage development is spreading at a rapid rate. With its untouched landscape and proximity to a major urban centre, Fairy Hill has become a vacationer's paradise. 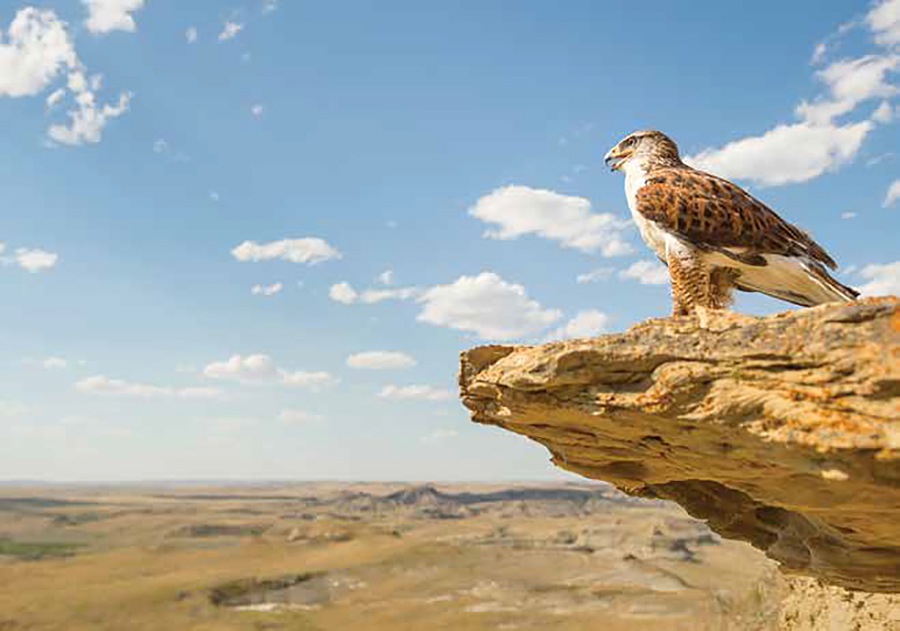 The five-kilometre-loop trail starts on the rim, but before long we wind our way down the slopes over grassy meadows and through aspen woodlands. Outstanding views abound, including vantage points over wetlands often alive with ducks and shorebirds.

While scenery is the biggest draw, Fairy Hill is also significant for its wildlife habitats. The varied landscapes support birds, from waterfowl to downy woodpeckers to northern harrier hawks, as well as coyotes, deer, moose, elk and the occasional black bear. The area is home to more than 30 endangered plants and animals, including the loggerhead shrike, Sprague's pipit, northern leopard frog and bigmouth buffalo fish.

On any given visit, the creatures you encounter may vary, but they never fail to bring a fresh appreciation for the wonders of Saskatchewan's native grasslands.

A trip to OMB is best when the Interpretive Centre is open: weekends from mid-May through September.

NCC maintains 170 properties in Saskatchewan. They’re free to visit (foot access only), but most do not have formal visitor facilities or designated trails.

Visit natureconservancy.ca/Saskatchewan to learn more about NCC’s conservation efforts or to get involved as a volunteer. 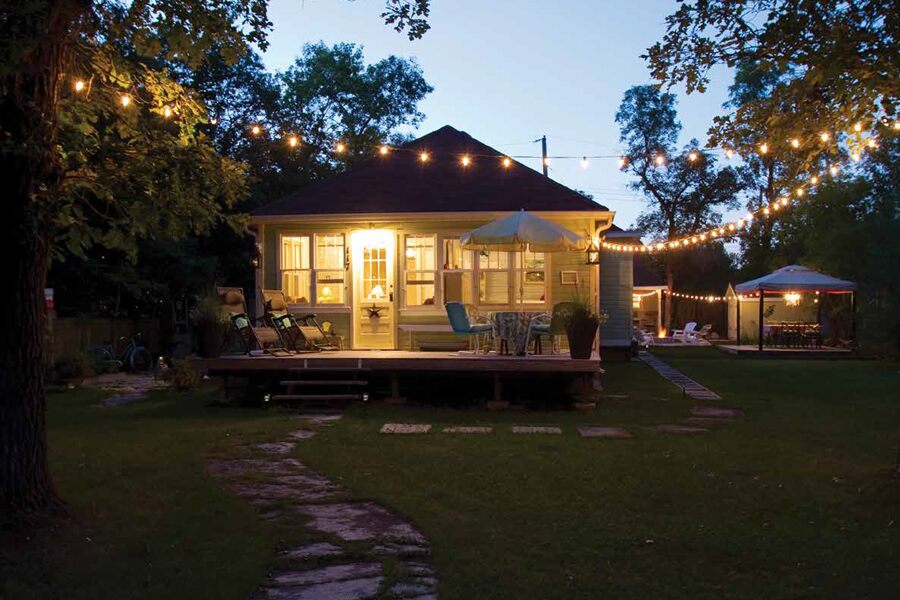 A guide to building, living in or renting a home away from home.

What you need to know before hitting the road to celebrate Manitoba 150 this summer.

The Coast is Clear.

Navigating your way through New Brunswick.