“Have you heard what really happened in Vinland?” Thorstein asks. The bearded Viking, his face illuminated by flickering flames, spins an ancient yarn of betrayal and bloodshed—and I’m spellbound.

Depending on which linguist you believe, the name Vinland alludes to wind, pasture land or grape-growing. Such intoxicating lore is what attracted me to this province—that and my Finnish heritage. Over the years, I’ve indulged my Nordic side by visiting Oslo’s Viking Ship Museum and listening to Viking-themed Swedish heavy metal. But living it up Odin-style on the East Coast is a first for me.

Daylight brings more opportunities to explore L’Anse aux Meadows, which in 2018 marked its 40th anniversary as a UNESCO World Heritage Site. From 1961 to 1966, Norwegian archaeologist Anne Stine Ingstad helmed the excavation of North America’s oldest known European settlement. In 1960, Ingstad’s husband, Helge, pinpointed its exact location with the help of local fisherman George Decker, who assumed it was a First Nations burial ground.

I can’t believe I’m finally here. I get chills wandering along a boardwalk built over the ridged terrain, which is dotted with black spruce trees and caribou lichen. As a brisk breeze blows from Islands Bay, my group spots a moose in the distance—one of more than 80,000 in the province.

Near the reconstructed grass-roof Viking buildings, rectangular indentations in the ground mark the original locations of a house, kitchen and workshop. The village was home to about 75 Norse men and women, along with their European slaves. Artefacts ranging from a bronze pin to a glass bead confirmed their presence.

But the settlement didn’t pan out. “Leif Erikson sailed for distant regions in the West to make himself a wealthy man,” explains friendly guide Matthias Brennan. “So L’Anse aux Meadows became a wintering base camp for further exploration.” Despite a prime location on a shipping route and waters filled with salmon, it never spawned the bounty desired by the Vikings, whose vast trade networks stretched from Greenland to Baghdad.

Still, my heavy-metal heart rejoices to learn that L’Anse aux Meadows witnessed the first iron production in North America. “They harvested and smelted bog iron ore, using a clay furnace heated with charcoal,” Brennan says. “And we have now revived the tradition. Last summer, we produced nearly eight kilograms—four times as much as the original Vikings.” Icelandic exchange students participated in the smelting, with the resulting iron destined for nails.

Fittingly, we next encounter Ragnar the blacksmith, surrounded by furs, shields and axes in his sod house. Ragnar notices my five o’clock shadow and cracks, “If you want to be a free man, you should grow out your beard.” For a second, I question the wisdom of having made the 434-kilometre drive here from the Deer Lake airport up Highway 430, known as the Viking Trail. Will my journey through dense boreal forests, past thriving seabird colonies and over stark tundra culminate in unpaid labour for gruff Ragnar?

At Northern Delight, a homey restaurant in nearby Gunner’s Cove, photos of icebergs and sea urchins adorn the yellow walls. Before dining, I peruse model Norse ships in the gift shop. I’m still pondering the sagas I heard the night before around Thorstein’s fire: tales of Erik the Red (Leif Erikson’s dad) and the Greenlanders, both composed in the 13th century, 200-plus years after the events they describe.

Why was L’Anse aux Meadows abandoned by the Vikings after only a few years? Was it a result, as the sagas indicate, of a Vinland trade dispute that escalated into treacherous slaughter? How different would Canada’s history have been if the Vikings had stayed?

My musings evaporate when dinner arrives. The platter of lightly battered fish and chips—fresh local cod and thick-cut home fries—is scrumptious. Devouring my dessert of partridge berry pie with vanilla ice cream, I can’t help thinking that the Vikings missed out big-time. To quote Led Zeppelin: “Valhalla, I am coming.”

I sleep comfortably in my queensize bed at the Grenfell Heritage Hotel and Suites in St. Anthony. Though it’s named after a pioneering British medical missionary, I keep wanting to call it “Grendel” after the terrifying monster in the Beowulf legend. Refreshed, I drive to Norstead the following morning to find out how the Vikings could have lived here if they’d stayed longer. 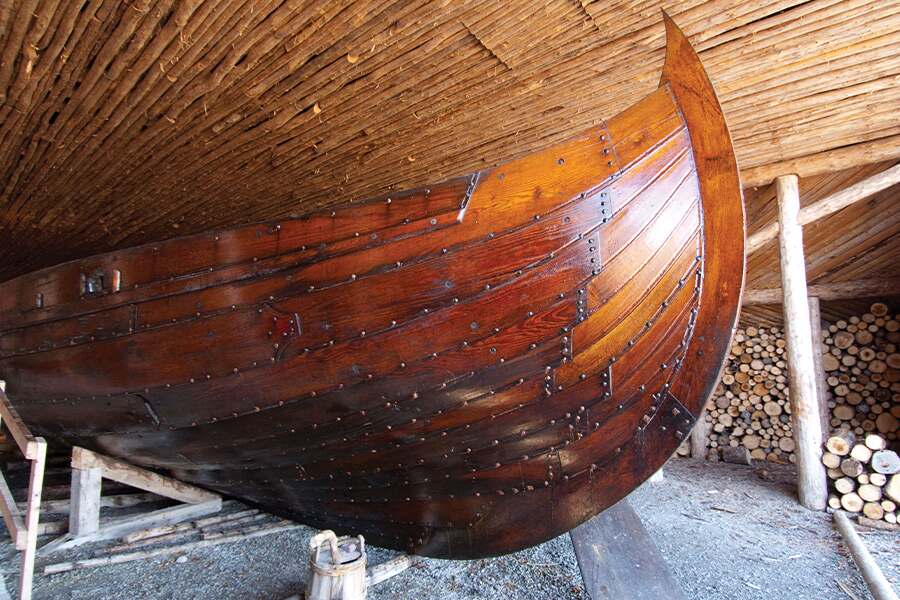 The replica Viking village, just two kilometres from L’Anse aux Meadows, was built in 2000 and features a fullsize knarr: a 16-metre-long oceangoing trading vessel. It’s named Snorri after the first European child born in the New World. Norstead interpreter Denecka Burden portrays Gudrid, Snorri’s mother, in a colourful linen tunic. Wearing jewellery depicting both Thor’s hammer and a Christian cross, Burden challenges Norse stereotypes: “Some killed, raped and pillaged, but everyone’s judging their civilization by one group of Vikings. Many were just farmers and fishers.”

From an impressive rune stone to the simple wooden church, a tranquil feeling pervades coastal Norstead. In the dim-lit buildings, I examine furs and coins for trading, learn about one-needle knitting, and discover how the Vikings baked and gardened. Even though Burden explains that smoke inhalation indoors yielded life expectancies of just 45 years for men and 35 for women, this rough-edged existence still feels more civilized than the sack of York as depicted in Vikings, History channel’s dramatized TV series. I’m eager to come back in June, when humpback whales frolic amid icebergs offshore.

Much like the towering Leif Erikson statue near Norstead, my Viking experience looms large over the rest of my visit to northwestern Newfoundland.

More than 300 kilometres to the south, I visit the still-functioning circa-1897 Lobster Cove Head Lighthouse in Gros Morne National Park, another UNESCO World Heritage Site. My mind flashes back to the Vikings’ seafaring exploits as I listen to folk songs like “The Wreck of the Steamship Ethie” and learn how Captain James Cook mapped Gros Morne’s dramatic, storm-swept coast in the 1760s. And a two-hour BonTours boat tour of Western Brook Pond—a glacier-carved lake with epic cliffs and waterfalls—naturally evokes the fjords of Norway in their mist-shrouded mystery.

A thousand years later, we may not know everything that really happened in Vinland. But the thrill of soaking up ferocious Viking sagas in Newfoundland is an unforgettable victory. Valhalla: I made it!