The Magic of Munich

From markets to museums, Germany’s Bavarian capital has much to offer

Rising, rising, rising. Halfway through my 30-minute sunset ride on the Umadum Munich, the view from 78 metres up is truly majestic. The world’s tallest mobile Ferris wheel debuted in 2019 in the revitalized Werksviertel-Mitte quarter of east Munich. I’m giving it a big “Ja!”

Next door, sheep graze on the grassy roof of Werk3, a sleek orange building that formerly produced mashed potatoes and dumplings. Today, it thrives with 22,000 square metres of shops, restaurants and creative outposts. In my spacious gondola, I turn and gaze beyond the München Ost railway station and the Isar River. Church spires adorn the heart of Germany’s third-largest city.

From this vantage point, it’s hard to believe that less than 80 years ago, Munich lay in ruins. In the last days of Adolf Hitler’s Third Reich, the city was reduced to rubble by Allied bombing. While I grew up on classic WWII fiction—like The Eagle Has Landed by Jack Higgins—I came here for a taste of how modern-day Munich both acknowledges and transcends its historical legacy.

Let’s roll back the clock to lunch hour. I’m a sucker for great food, and the Viktualienmarkt, founded in 1807, gets my foodie juices flowing.

Just steps from the neo-Gothic Neues Rathaus (a.k.a. New Town Hall) in central Marienplatz, Munich’s permanent outdoor market features more than 140 stalls. From bratwurst and cheese to juice bars and sushi, Viktualienmarkt offers something for every palate. For less than €6, I buy pickled herring and soused herring sandwiches, which I devour at a long communal table underneath chestnut trees on a crisp but sunny afternoon.

The tasty snacks have made me hungry for some culture—this city of 1.5 million boasts more than 80 museums. On past visits, I enjoyed the Alte Pinakothek, which has more than 700 masterpieces by Rembrandt, El Greco and Albrecht Dürer, as well as the Deutsches Museum, whose massive collection of technological innovations includes the first automobile and one of the first electric dynamos, an early electrical generator. Today, I’m in the mood for something lighter, so I stroll over to the Toy Museum.

Another Marienplatz fixture, the 1980s-era museum occupies a tower with a spiral staircase at the Old Town Hall. Instead of taking the elevator, I get a workout by climbing to the top floor. For adults and children alike, the Toy Museum is fascinating. Eyeing a display of teddy bears clustered around a vintage Christmas tree, I learn how craftsman Richard Steiff invented teddy bears with movable limbs after witnessing a bear-wrestling match at a 1902 circus.

Farther along, a cabinet is loaded with dolls to showcase the history of Barbie, while another features quirky robots. Next to some model airplanes, inspired by Charles Lindbergh’s Spirit of St. Louis, I spot an eerie detail: on the side of a miniature postal truck, a swastika has been covered over. 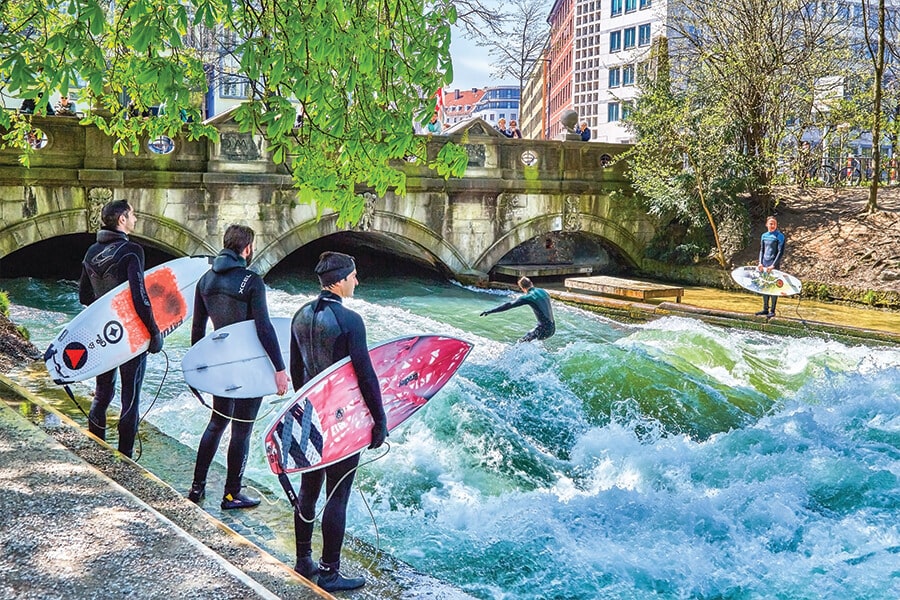 Give the recent resurgence of populist ideologies, it’s important to glean some historical context while in Germany. A 15-minute U-Bahn trip brings me to the Munich Documentation Centre for the History of National Socialism. Inside the stark white-cube building, marking its fifth anniversary in 2020, I explore how this city became a hotbed for anti- Semitism during Hitler’s rise to power.

There are four exhibition floors laden with photos, films and documents, along with an excellent audio guide. The 1923 cartoon cover of Simplicissimus, a satirical magazine, illustrates how the prototypical Nazi supporter was dangerously underestimated as a “foggy-brained, beer-swilling man of the past, his eyes blinded by swastikas.” From 1933 book burnings at Konigsplatz to 1937’s “Degenerate Art” exhibition at the Hofgarten, I’m chilled to see how intellectuals and artists were targeted. And I’m taken aback to learn that a Nazi-era child-rearing book, The German Mother and Her First Child, remained in print long after WWII, selling 1.2 million copies into the ’90s.

I pop into the cavernous Bavarian State Library, where bespectacled researchers and stylish students queue to read materials from its collection of 10 million-plus books. For Anglophones, the Words’ Worth bookstore stocks well-curated titles in genres ranging from sci-fi to cooking. It also sells seasonal British treats like brandy butter and Christmas pudding. During the last two weeks of November, the Literaturhaus München hosts the annual Munich Literature Festival, which has previously featured Umberto Eco (The Name of the Rose) and Ken Follett (The Pillars of the Earth). After riding the Munich Wheel, I’m all set for a relaxing evening. As much as I’d love to tour the renowned Bavaria Filmstadt, where director Wolfgang Petersen shot hit movies like Das Boot, Cabaret and The Neverending Story, it’s time for dinner. Thankfully, I have a film-worthy venue at my five-star hotel, the Vier Jahreszeiten Kempinski Munich.

At the in-house Schwarzreiter restaurant, I feast on Bavarian steak tartare with mustard cream, herb salad and roasted farmer’s bread made in the eatery’s open kitchen. The authentic flavours leave my stomach singing like a performance of The Barber of Seville at the nearby Bavarian State Opera.

The Vier Jahreszeiten Kempinski Munich is an attraction in itself. The 306-room hotel, which features a stained-glass dome in its mahoganypaneled lobby, dates to 1858. Famous guests have ranged from Sophia Loren to Vladimir Putin. I sleep soundly in my recently renovated grand deluxe room, made cozy by wood flooring and Bavarian landscape paintings.

The next morning, I clear my head for another magical day in Munich with an airy stroll through the Englischer Garten. It burgeons with landmarks like the Greek-style Monopteros pavilion and the Chinese Tower. In warmer months, active types can even surf on the artificial Eisbach River, which runs through the 3.73-squarekilometre park. “I must come back again soon,” I murmur to myself.

It’s a thought that hits me again before I fly home—as I sip a cold stein of golden lager at Airbrau, Europe’s first airport brewery. Despite Munich’s dark past, the city offers so many high points for visitors. Not to mention the world’s best pickled herring, cutest teddy bears and tastiest beer. 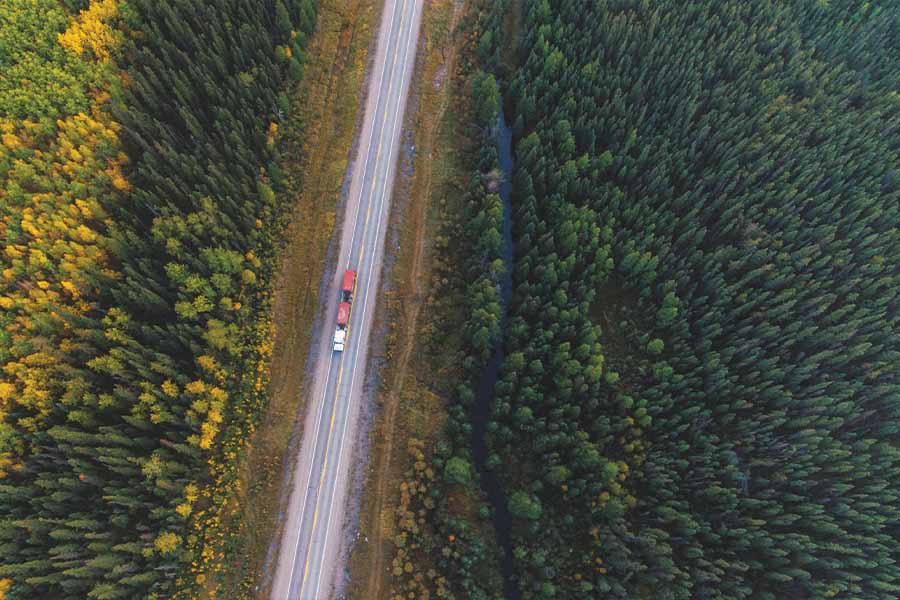 Manitoba’s highway 6 winds through some of the most striking sights in the province.

Protecting and Advocating for Manitobans

Your safety is our top priority.